IN BETWEEN  „Not reflection, but forgetting; not contradiction, but a contestation that effaces; not reconciliation, but droning on and on; not mind in laborious conquest of its unity, but the endless erosion of the outside; not truth finally shedding light on itself, but the streaming and distress of a language that has always already begun. Not speech, barely a murmur, barely a tremor, less than silence, less than the abyss of the void, the fullness of the void, something one cannot silence, occupying all of space, the uninterrupted, the incessant, a tremor and already a murmur, not a murmur but speech, and not just any speech, distinct speech, precise speech, within my reach.“ (Foucault / Blanchot)

An analogy taken from natural science helps to illustrate the way we perceive and create architectural space. Imagining and developing these spaces as well as inhabiting them is a dynamic process of adding, subtracting, transforming. Living organisms – and i would like to make this rule applicable for architecture as well – are being kept alive by a continuous creative process (”… Of more complex substances from simpler ones…” And vice versa). This search is asking for an experimental approach to unknown territories. This semester started up with an abstract exercise, that anticipated spatial targets and trained an intuitive approach to the given task.

In a first subject, space and built volume were explored as conglomerates of their contents – the objects and the connecting space in between them. While in the syllabus of the first investigation the task remained mainly abstract, in the main program the hereby found desirable spatial conditions were filled with required functions and invented situations.

THE PARK OF LETTERS / THE URBAN MEDIATOR

A LIBRARY IN LOS ANGELES

This library is open to the public. The building is a hybrid that interweaves public open spaces with private zones. It functions as an urban mediator. The threshold between public areas -the street and the library- will be dissolved. The sidewalk turns into an interior sequence of spaces that leads the visitor through the building. What kind of boundaries separate the public but still protected volume from the outside? On approaching the building and entering into its atmosphere, the visitor gradually transcends from street life into a surrounding that will open up his/her mind and imagination. The skins of the building transform from the traditional shell of shelter and protection to intimate, sensual cells that embrace the visitor, who is being slowly absorbed as he is by reading a book or doing a research. Being situated in a dense and highly frequented area of the city, the library offers spaces for intense exchange of information as well as zones for retreat, concentration and contemplation. Like a cathedral that is offering a public void within the condensed center of a city, this library provides spaces outside the commercial, business and entertainment zone of the city. The building is developed through its contents. It appears to be an agglomeration of these components. Its quality derives from the inner structure, the relation of the sequence of spaces inside and the space that remains in between them. The building itself is conceived as a continuous path, a public promenade. The smallest units of the library -its media- are going to change, disappear, reappear in an altered form over the course of the years. Regardless of the nature of the present and coming media, the visitor will be attracted by the spatial peculiarity of the building to actively make use of it. This library is the prototype of an urban structure that functions as a gesture of openness, encounter and communication.

1 „Analysis of what is there“

2 „Critical analysis of the task“

This step will initiate the conceptual approach to the project. The given program opens up a theoretical discussion about the subject itself. You will have to take position to the task: What is your conceptual approach, what is your vision? Cross-references to the reading list and your individual conceptive work are expected.

Concept of the program

The characteristics and nature of a library will have to be defined. A research about its change of importance within the structure of a city as well as a study on different media (books, video, CD) can be the point of departure for this theoretical approach. You will define your vision about a place where information, exchange of knowledge and communication is going to take place. Why would people move from their homes or working places in order to get informations or help that they could also find via internet? (Why do people still go to the movies even though they have a TV-set at home?) The qualities of the main reading area and the spaces for individual use will have to be defined. We will talk about different modes and velocities of accessing and using the new structure.

3 „Analysis of what will be there“ – the program

The structure of the building and the choice of materials will inform and intensify the design. In cooperation with the structure faculty (visiting critics) the design will be deepened by taking into account physical facts (forces, spans,…) as well as qualities and characteristics of different materials that will be chosen in order to support the spatial ideas.

Additional readings will support the discussion: 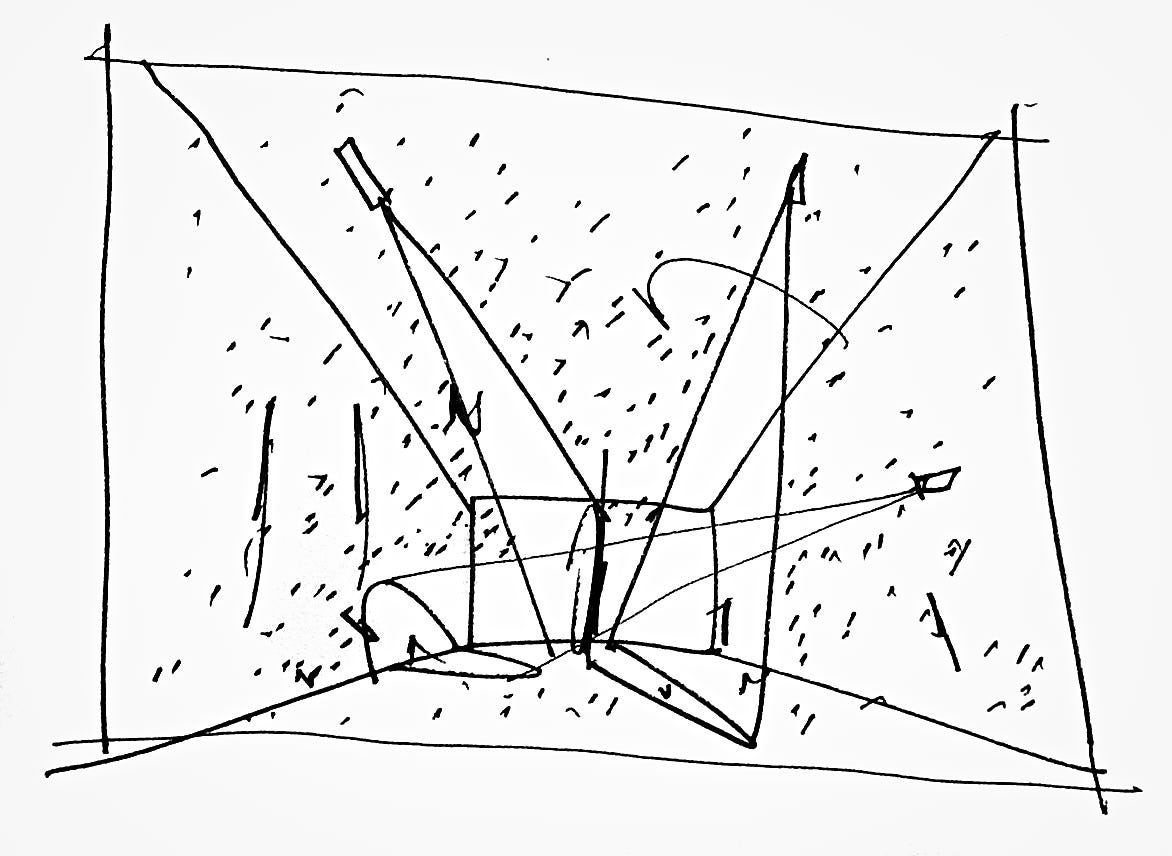 The topic of this semester focussed on the study, observation and interpretation of found conditions. The main project is situated in Vienna/Austria, a city, that can be understood as a conglomerate of its history and inhabitants. Building within this complex structure is asking for a set of „tools“ and capacities from the designer. One of them being the high alertness and sensitivity to what is already there (existing buildings, history, inhabitants, found objects,…). Consequently, all the steps the design goes through, continue the story of the site and have equally to be taken into consideration. The nature and specifics of the site and the task unveil step by step. The rest remains in the dark. In a short project, the students approached the topic in an abstract exercise:

These are the components that can be discerned while approaching the project:

2. Roderick Usher (The Fall of the House of Usher, Edgar Allan Poe), whose malady is decribed as such:
„ He suffered much from a morbid acuteness of the senses; the most insipid food was alone endurable;
he could wear only garments of certain texture; the odours of all flowers were oppressive; his eyes were
tortured by even a faint light; and there were but peculiar sounds, and these from stringed instruments,
which did not inspire him with horror.“

3. Excerpt from the movie Zabriskie point

These components had to be studied, interpreted and set in relation to each other.
Every step is documented by a description (story) and/or an illustration of the path (story board).
Finally we ended up with an object/model, that merges the different qualities. The object bears formal and
functional contents, that further guided us through the design process of the semester.

The main project is the „remodeling“ of what a big fire in August 2001 left from the Sofiensäle
in the third district of Vienna.

The Sofiensäle were originally built as a Russian steam-bath. They witnessed various changes of use. We investigated in the question, what kind of bath we would build these days. In order to find that out, we looked at different types of baths. These analyses formed the base for our project.
The following baths were analysed:

█
3. LOCATION WITHIN THE CITY

The site is situated in the third district, east of the historic center of the City of Vienna and close to an important junction for public transportation – Landstraße, Wien Mitte. The „Sofiensäle“, the ruins of which are situated on this site, were destroyed by a serious fire on August 16, 2001. The distance to the very center of the city – St. Stephan‘s Cathedral – is 1 km (= 0,62 miles). Situated in a very dense urban context, there are few open spaces around the site. The Vienna Stadtpark is situated in a distance of 500 m (= 0,31 miles),
the Vienna Prater is situated in a distance of 800 m (= 0,5 miles) from the site. The site can be reached by means of public (municipal railway, subway, trams, busses) and individual transport.

The surface of the area is about 7.000 m2 (= 75.350 square feet). The neighborhood is characterized by its dense urban structure – which consists mainly of housing blocs – and its lack of urban diversity.

5. LAND USE AND MASTER PLAN

Due to the fire of 2001 the area of the Sofiensäle is currently waste land. The remains of the historic buildings are mainly the loadbearing walls. The Main Hall in particular was destroyed seriously in the fire: The roof structure – which was the first big steel construction in Vienna and covered a surface of 48 x 18 m (= 157 x 59 feet) – was completely destroyed. The buildings on this bloc are 5-6 floors high (18-23 m / = 59-75 feet) and are mainly residential buildings. The street levels of the buildings Marxergasse 15 and Seidlgasse 17-19 are used for restaurants/cafés. The neighboring blocs ressemble this structure in heights and uses. The blocs situated North an East of the site are significantly lower than the ones situated West and South (- 32 m / = 105 feet).

The site of the Sofiensäle and what was left from the historic buildings, witnessed a complex history from being used as a Russian steam-bath, a concert-hall and a ballroom, a center for political events to an event-center. The fire of 2001 could, according to the owner, have ended this story. The fact, that the ruins still remain as a listed building, ask for a continuation of the story of the Sofiensäle. Looking at the complex history of the site and the building, taking the site‘s position within the city and the neighborhood into consideration, imagining a structure, that would provide public as well as very private space, that would improve the at present one-dimensional, not diverse use of the area, the students were asked to design a public bath on the site of the Sofiensäle, incorporating the listed remains of the building. The program was based on the analyses of public baths. The building itself was developed through its contents and its historic and formal characteristics. It appears to be an agglomeration of these components. Its quality derives from the inner structure, the relation of the sequence of spaces inside and the space that remains in between them.